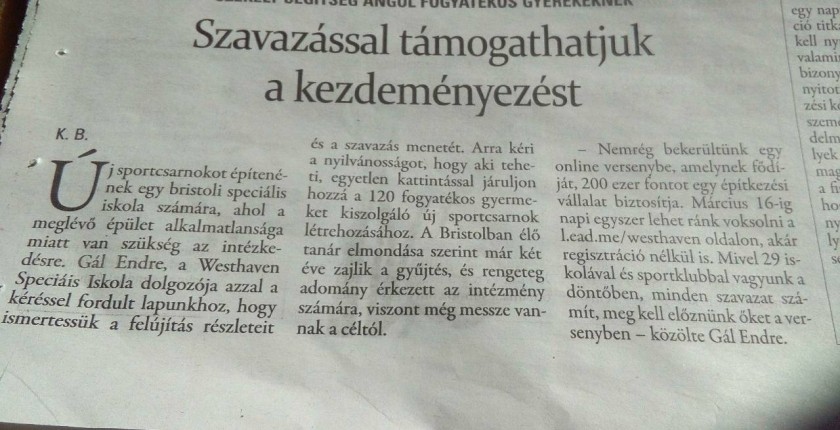 The clock is ticking, the end of the competition is approaching fast so we had to double down on our efforts to attract more votes for our Sports Hall project.

One of our staff members Mr. Gal, originally from Transylvania, contacted the local newspaper, asking them to  publicise our Sports Hall Appeal. They responded favourably, publishing an article in today’s paper. The ‘Hargita Népe‘ newspaper covers the Hargita county in Szeklerland (cca. 350,000 people) so we are hoping this would lead to lots of votes. We would like to thank ‘Hargita Népe’ for publishing the story and everyone who is supporting us by voting for our school.

Here is a rough transcript of the article:

We can support the initiative by voting for them

A special needs school in Bristol [Uphill] would like to build a new Sports Hall because of the inadequate conditions in the current building. Gál Endre, one of the staff members contacted us with a request to publicise this project. He would like to ask the readers to support this initiative which would help 120 special needs pupils. The teacher, who lives in Bristol, told the newspaper that they started fundraising two years ago and received a lot of donations but they are still far from reaching their target.

– Recently we were entered in the national finals of a competition organised by a building company, with the top prize of £200,000. You could vote for us daily until the 16th of March at l.ead.me/westhaven, no registration required. We are competing against 29 schools and sport clubs, so every vote counts – we need to win this competition – he said.

Do you have any interesting stories about this project? Let us know!