Julius Caesar by William Shakespeare performed at Shakespeare in Styria 2014, with Christoph Johan (as Octavius). Photo: Francisco Peralta Torrejón   To commemorate the 400th anniversary of the death of William Shakespeare, we held a “Shakespeare Day” at Westhaven on Wednesday 20th April. All lessons throughout the day had a Shakespearean theme and pupils had the […] 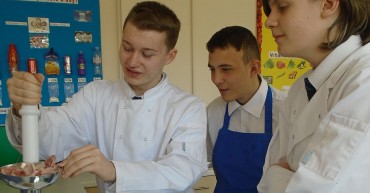 It was a busy week in Food Technology. Year 11 students have been learning how to mince pork and make their own sausages! The year 10 Catering pupils have been working hard of developing their skills in preparation for their Catering exam making meringues. As part of our cultural foods module this term we have […]